The digital revolution touches almost every aspect of modern industry, and the financial markets are no exception. Learn about digital securities and discover the role of digital dollar stablecoins in this innovative, new market segment.

What Are Digital Securities?

Digital securities are digitized investment contracts that provide an investor with a contractual claim on an underlying asset. Through the process of tokenization, traditional securities such as stocks and bonds can be issued and traded as digital tokens on a blockchain ledger.

The two most common types of digital securities are tokenized equity and tokenized debt. Tokenized equity, also known as equity tokens, represents a claim on a company’s assets and earnings, while tokenized debt, also referred to as debt or bond tokens, is an investment in a debt instrument.

Digital securities are a digital representation of a financial contract on a distributed ledger, such as a public blockchain, represented as a token with the additional benefit that this token is governed by a set of smart contracts and those smart contracts enforce the programmability of the features of the security.

As digital securities are investment contracts, they are regulated under the issuer’s country’s securities laws, which provides a layer of consumer protection for investors.

As digital securities are investment contracts, they are regulated under the issuer’s country’s securities laws, which provides a layer of consumer protection for investors.

While digital securities aim to replicate the investment vehicles of traditional securities, there are several clear differences between the two.

A company that wants to raise funds could issue 25% of its share capital as digital security in the form of an equity token sold to investors. The company’s shares would be tokenized so that one token would represent one share. The value of each tokenized share would be determined at issuance and linked to the company’s current valuation.

During the company’s security token offering (STO), investors could purchase the equity token using a stablecoin, such as USD Coin (USDC). Once the token sale is complete, investors receive their equity tokens and are now shareholders. The digital security can then be traded in the secondary market in a similar way as traditional stocks.

The first-ever digital security issued in compliance with securities law was launched by Blockchain Capital in April 2017 to raise $10 million for a $50 million tokenized venture capital fund. The BCAP token sale only lasted a few hours as the demand for the equity token, which was also the first tokenized investment into a venture capital fund, experienced higher demand than expected.

Today, the digital securities ecosystem is composed of a variety of tokenization service providers, secondary exchanges, and a growing array of tokenized investment vehicles.

Securitize, a pioneer in digital securities, worked with Lottery.com to enable the company to make payouts to its shareholders across the globe.

Investors who took part in the Lottery.com security token offering were eligible to royalty payments, and the company needed a way to process payouts while complying with local government regulations.

Using Securitize’s Payout App, investors could choose between fiat currency payment and digital currency methods and fill out the required tax forms online, all with the click of a button. A large portion of investors chose crypto payouts, with more than half opting for payment in USD Coin (USDC).

The Future of Digital Securities

In the future, we can expect effectively any financial security to be turned into a digital token that operates on a blockchain. Through blockchain-powered tokenization and the deployment of smart contract technology, even the most complex financial products can be digitized and become tradable over the Internet.

For issuers, that means a reduction in cost to go to market and a potentially broader investor base to tap into. For investors, it means the democratization of a wide range of asset classes as anyone with an Internet connection will be able to purchase tokens that represent a legal claim on a company or an asset.

Tokenization: How to Turn Anything of Value Into a Digital Security

Tokenization is the process of digitizing a physical asset or a security and turning it into tradable, liquid digital securities in the form of a digital token that “lives” on a blockchain.

The tokenization of assets can create new digital securities that unlock the ability to access, invest in, and trade the underlying physical asset.

The ability to tokenize assets and securities opens up new opportunities for businesses to raise capital and for investors to gain exposure to a wide range of asset classes.

For example, a real estate development company could raise capital by tokenizing 50% of one of its properties and selling the tokenized shares to investors across the globe. The real estate developer would gain access to fresh capital, while investors would receive a fractional share in a real estate property — a traditionally illiquid asset class with high barriers to entry. Additionally, the investors could earn rental income from the property that could be paid out in digital dollar stablecoins.

The tokenization of physical assets and traditional financial securities opens up new opportunities for businesses and investors.

The main advantages of tokenization include:

For issuers, the primary benefit of tokenization is that it provides new, affordable avenues to raise capital. Companies no longer need to issue a bond via a syndicate of banks or list their shares on a public stock market. Instead, businesses can tokenize share capital or issue a tokenized bond directly to investors in the form of digital security tokens.

Due to the open, borderless nature of distributed ledgers, digital securities can be sold to and traded by investors across the globe. Anyone with an internet connection and the right investor accreditation can take part in a digital securities offering (DSO). As a result, issuers gain access to a new pool of investors while the financial markets are democratized in favor of the investor.

For investors, tokenization also offers fractional ownership, which is not always a possibility in the traditional financial markets. For example, a young investor who has just graduated from college could purchase a tokenized share in a real estate property to benefit from the growth in the real estate market without having to purchase a property.

Securitize has built a platform that enables companies to tokenize existing securities and to create new, digital-native securities that operate on a blockchain ledger.

Securitize uses blockchain technology as a way to digitize a security where we include all the programmability of the security, such as the features and the rights, and enforce the compliance rules of the security with smart contracts on the blockchain. All beneficial ownership can then be tracked via a token on a blockchain.

Additionally, the San Francisco-based digital securities services specialist handles investor onboarding and setting up a security’s features, and can act as a transfer agent to process security payouts, corporate communications, and governance on behalf of the issuer.

While it is difficult to determine exactly when the wave of tokenization will hit the traditional financial markets, it is only a matter of time.

In the future, we can expect to have investment portfolios that hold:

A great example of tokenization would be this company that is taking this incredibly popular cartoon character in Asia and creating a tokenized digital security for the future royalty streams of that animated character.

Settlement would occur on-chain and within seconds, alleviating the need for clearing and settlement intermediaries, and the global investor community could take part in these types of investments.

The Role of Stablecoins in the Digital Securities Market

As the digital securities market is growing into an innovative new asset class, there is one missing piece to the puzzle: stablecoins.

Digital securities require a blockchain-native pricing and settlement currency that enables smart contract-powered payments (for dividends and coupons, for example) and on-chain settlement.

A digital dollar stablecoin, such as USD Coin (USDC), is ideally positioned to fulfill that role because of its features:

Digital securities need to be priced in a currency that provides price stability. For tokenized securities issued in the United States, a digital dollar stablecoin — redeemable 1:1 for US dollars held in a regulated financial institution — would be the logical solution.

Stablecoins also provide an unprecedented level of accessibility. Anyone with an internet connection regardless of where they are located in the world can store, send, and receive stablecoins. For the digital securities market, that means issuers can tap into a global investor base through on-chain settlement of dividends and coupon payments.

Global stablecoins can also act as a secure, low-cost settlement mechanism as all on-chain transactions can be followed in real-time, cannot be reversed, and only cost a fraction of a dollar.

Finally, stablecoins possess the technical specifications to process smart-contract-powered payment flows. Dividend or coupon payments that are automated via smart contracts, for example, require an on-chain digital currency to process transactions. That’s where digital dollar stablecoins come in. Price-stable, on-chain money is a requirement for digital securities to replicate existing investment vehicles and to unfold their full potential.

Digital Securities and stablecoins are two sides of the same coin. You have this cash on blockchains that can be used to move and settle value, and you have a [digitized] financial contract. That contract is the security.

The integration of digital dollar stablecoins into the digital securities market has already begun and is poised to accelerate as this new asset class continues to grow.

Learn more about this episode

USD Coin: The Base Currency for Digital Securities

USD Coin (USDC) is arguably the best positioned stablecoin to act as the base currency for dollar-denominated digital securities.

USDC is a fully reserved digital dollar stablecoin issued by regulated financial institutions. Each USDC is redeemable 1:1 for the US dollar, and all US dollar reserves for USDC are subject to monthly attestation reporting from leading auditing firm, Grant Thornton LLP. As a result, USDC comes with the highest level of trust and transparency. 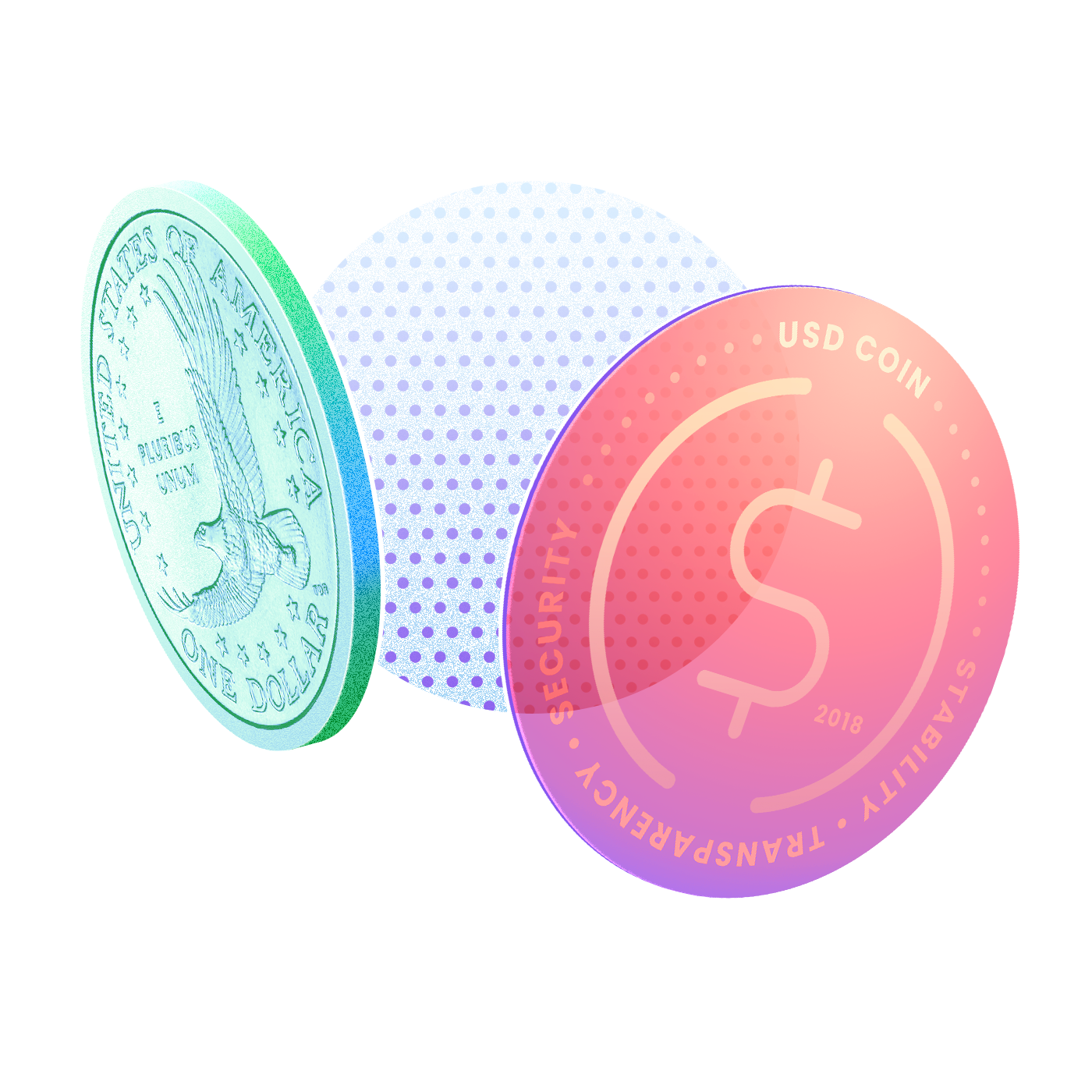 USDC is open, global, transparent, liquid, and regulated, which makes the market-leading digital dollar stablecoin highly suitable as a pricing and settlement currency for digital securities.

Additionally, Circle offers a full suite of solutions for supporting USDC, enabling companies that are developing digital securities or marketplaces to seamlessly manage their flows and payment flows. For example, using the Circle Payments product, issuers can accept card, wire, or ACH  that automatically settle in USDC while Circle's Digital Dollars Accounts product can be used to integrate digital dollar wallets into a tokenized securities trading marketplace.

Digital securities require a trusted pricing currency and settlement vehicle to succeed. USDC is poised to play those roles in the upcoming tokenization of the capital markets.

Let us connect you with the right team at Circle.

Get in touch with Circle