Five years ago today on March 26, 2014, the original Circle consumer app launched in beta — a simple application that allowed people in the US and UK to connect their credit or debit card to buy bitcoin.

Out of this application emerged what would become one of the largest OTC desks in crypto that in 2018 alone, handled over $24 billion in notional volume. This is the story of Circle Trade. 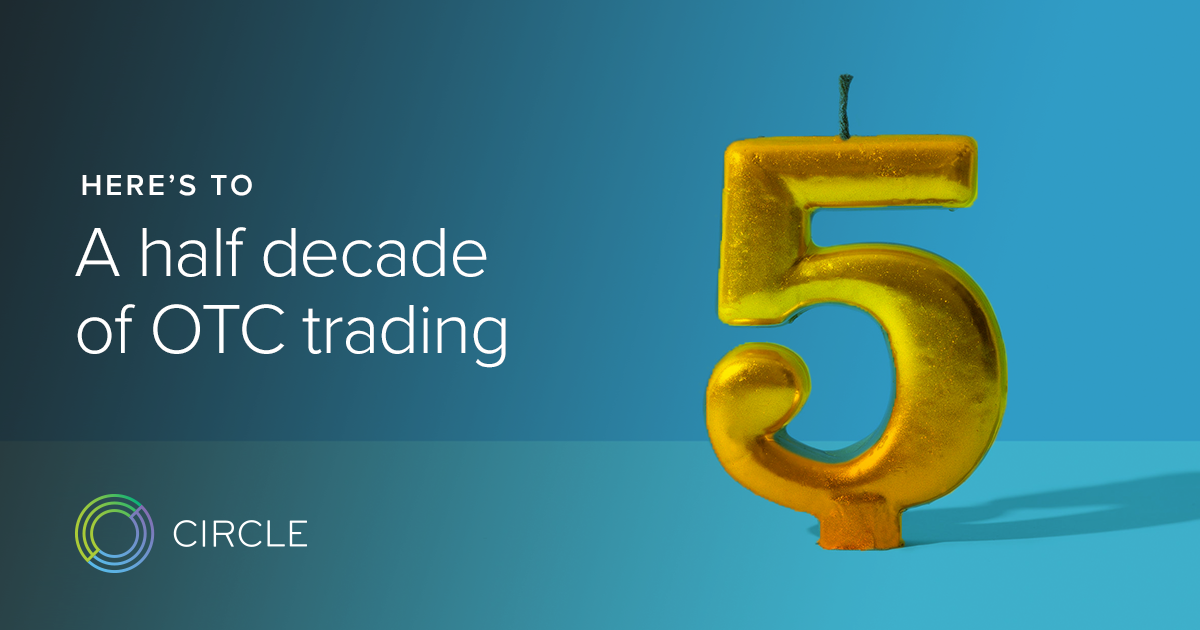 Evolution of the desk

As users of the app bought and sold bitcoin, Circle employees were in the background buying bitcoin to meet customer demand. While the beta version of the app was by invitation only, it eventually opened to the general public and its popularity picked up precipitously. This is when the current head of Circle Trade, Dan Matuszewski (Mat-a-zoo-ski), joined Circle to help meet the app’s growing liquidity needs.

In the early days, Dan and team were buying and selling bitcoin directly with other burgeoning OTC desks that would become Cumberland and Genesis, and through exchanges like Kraken, Bitfinex, Bitstamp, Okcoin and the now defunct BTC China. At the time, bitcoin was trading for around $500 with a $7B market cap.

The network of individuals trading large amounts of bitcoin in 2014 was relatively small when compared to today. Since Dan was interacting with these traders on a daily basis, he built strong relationships with most of them. Before long, instead of Dan reaching out to other traders to meet the treasury needs of the app, traders started coming to Circle when they needed to buy or sell bitcoin in large quantities. This is when, according to Dan, “we started trading beyond hedging risk,” and Circle Trade was born.

In early 2015, market activity slowed as the price of bitcoin broke below $200. Despite the decline, Circle Trade continued to grow throughout the year while building one of the most efficient and connected services for buying and selling bitcoin in bulk. This positioned them well for industry catalysts that would follow in 2016 — the bitcoin halving and the Ethereum ICO boom.

Bitcoin halvings occur every four years, when the amount of new bitcoins introduced into the system each day reduces by half (this is what makes bitcoin a deflationary currency). The 2016 halving occurred in July but the bitcoin markets picked up in the months prior as people speculated on what the added scarcity would do to bitcoin’s economic landscape.

During this time, bitcoin broke through $500, reaching a new high of $780 and a market cap around $12B. As volatility ramped up prior to the halving, Circle Trade found its services in increasing demand.

Ethereum had originally launched in July 2014. At the time, there were other budding cryptocurrencies, but over 90% of the entire crypto asset market cap belonged to bitcoin. Subsequently, the majority of Circle Trade’s business up to that point was trading bitcoin for USD. This would change in 2016 when according to Dan, “Ethereum gets interesting.”

Ethereum ICOs are when a new crypto project sells part of their token supply to early investors to fund operations. Because investors had to first buy Ethereum’s native token (Ether) to participate, the demand for Ether exploded as ICOs grew in popularity.

During the crypto market lull of 2015, the price of Ether hovered under $1 USD with a market cap under $100M. By May of 2016, the price of Ether hit $14 USD and the market cap reached $1B USD for the first time. Suddenly, a diverse universe of crypto assets emerged and Circle Trade went from only trading bitcoin to trading large volumes of Ether and ICO tokens as well.

The growth of Circle Trade & the industry

The catalysts that developed in 2016 carried over into 2017 when bitcoin and Ether went parabolic. Bitcoin kicked off the year by breaking through $1,000 and then doubling by mid-year, hitting a market cap of nearly $40B. During the same time, Ether hit $370 and reached a market cap of $35B. This rapid market expansion carried into early 2018, when the market cap of all crypto assets reached an astounding $800 billion dollars.

Throughout crypto’s rapid expansion, Circle Trade grew its operations from Boston to New York, Hong Kong and London while developing an industry-wide reputation for integrity and excellence. From its humble beginnings in March 2014, the desk traded with over 1,000 counterparties across 36 crypto assets, transacting $24B in notional volume in 2018.

What’s next for Circle Trade

The crypto markets slowed during the latter half of 2018 and 2019. Over that time, the market retracted from its $800B highs back to around $140B. While the correction and slowdown is top of mind for the industry, it looks less stark when compared to its $7B market cap 5 years prior.

The current market lull is somewhat reminiscent of 2015, where innovation in the industry was high but overall market activity relatively low. Unlike in 2015, however, awareness of the asset class is now ubiquitous, with more established institutions and tech giants entering the space each month.

While no one can predict when the next market catalyst will be or what will cause it, with the amount of innovation pouring into the space, the future appears bright. Just as they were during the last market slowdown, Circle Trade remains as well positioned as ever.

To learn more about crypto OTC desks, check out this overview from Circle Research: How does crypto OTC actually work?

Hosted by Jeremy Allaire, Dante Disparte and Ryan Feit, The Money Movement explores the ideas and opportunities that are driving the new world of digital money, capital formation and economic inclusion.
WATCH NOW