ICYMI: Check out Episode 4 and tune in for a new show this Thursday

Catch our Special Edition of the Money Movement, Episode 4: Full Reserve Banking, “Narrowbanks” for Digital Currency and the China Model here or take a listen to the podcast on Spotify or Apple Podcasts. 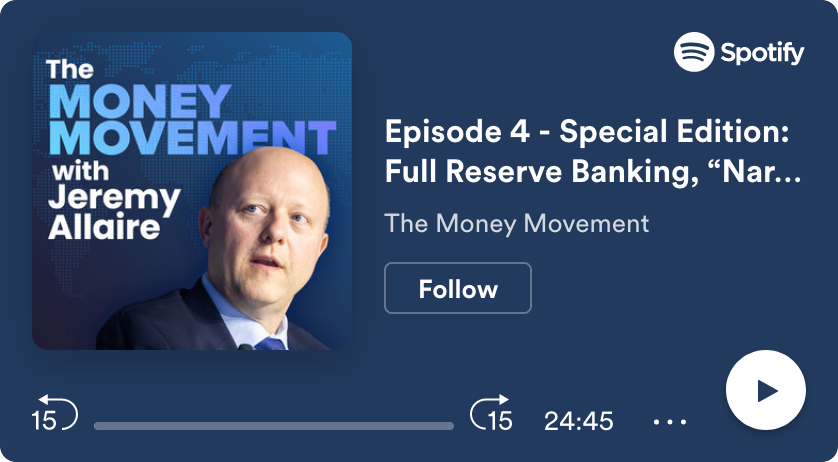 In this Episode, we covered a lot of ground, including a conversation withThe Bank of England’s Michael Kumhof will joined to discuss his work on Full Reserve banking and digital currency models. We discuss his The Chicago Plan Revisited, where he argued that had the US adopted a full reserve banking model, as proposed by the Chicago Plan during the Great Depression, the US would have seen both higher output, fewer recessions and lower levels of debt. And we connect the dots between this and new models of central bank money digital currencies, including proposals he has put forth with the Bank of England.

We then moved to a discussion with the IMF’s Tommaso Mancini-Griffoli, who serves as Deputy Division Chief in the Monetary and Capital Markets Department. Tommaso has been a global thought leader on models of digital currency and stablecoins and their impact on the banking sector, regulatory frameworks and the international monetary system.  Tommaso and Allaire discuss the proposed creation of “narrow banks”, a new form of chartered national bank whose purpose would be to hold full reserve assets with central banks as part of a system of issuing stablecoins or central bank sponsored digital currency.

Finally, we move on to China and their new DCEP digital currency initiative that introduces the world’s largest real full reserve banking model applied in the digital realm. We were joined by noted Chinese economist and Associate Research Fellow for the People's Bank of China, Dr. Chuanwei David Zou, Chief Economist at Wanxiang Blockchain, who has published extensively on DCEP and breaks down DCEP, its basic structure and functions, and some of the broader long-term implications for how the world economy will transact with China using digital currency.

On Thursday, catch Episode 5: The Future of Corporations in the Age of Blockchains where we'll dive into some of the more profound possibilities that arrive with public blockchain infrastructure, exploring the very essence of how we form organizations to create value, govern and coordinate economic activity. Going from the macro into the micro, we'll explore how blockchains are opening up completely new forms of global corporate forms.

We are privileged to be joined by leading academic thinkers, entrepreneurs and technologists who are the very cutting edge of re-defining the firm in the age of blockchains.